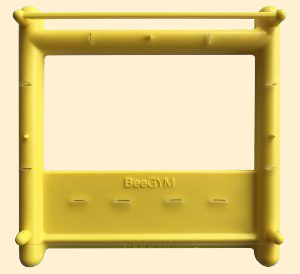 Here is what we have learned so far:

• In Bee Gym hives mite drop can go down to zero, however Varroa always comes back.


Development of the Bee Gym Slim.

The original Bee Gym is designed to fit onto a Varroa mesh floor at the bottom of the hive. We discovered that it also works well on top of the brood frames and that adding in more Bee Gyms improves the results!

Studies carried out during 2018 and 2019 led to the development of the Bee Gym Slim. It’s a simplified version of the Bee Gym that fits into bee space, lying on top of the brood frames. It has less parts than the Bee Gym and is more economic to produce, allowing the beekeeper to use three or more per hive.

Aims and purpose of the Bee Gym Project

What Beekeepers are Saying about the Bee Gym

Stuart
I think this whole design is a brilliant idea!  No chemicals! Easy to put in! I've looked through the mesh floor with an old Ford Escort wing mirror to see the bees grooming, it's a heartwarming sight. As are the live tiny mites which have obviously been dislodged, crawling around on the board (but hampered by vaseline).
Thanks a lot.
Julia Doyle

Dear Stuart
On my last inspection the Bee Gym was in use. I feel sure that having a Bee Gym available from the start has been the main reason for the extremely low Varroa count throughout last season, and so far this season. Thank you.
Yours sincerely.
Liz Lee

Stuart
the bee gym is still in my long hive and I've been counting mite drop on a (mostly) daily basis all season.  The mite drop peaked at about 40 a day in early July and has gradually declined over the summer and at present it is less than 5 a day .. sometimes as low as nothing !  The bees are healthy, no sign of brood disease, DWV or Nosema.  They are a delight to handle and remain completely untreated so, in terms of varroa, I'm doing something right.
When the mite drop has been at its highest I've noticed a pattern of dead mites beneath your original bee gym ... it's less noticeable now there are less mites and I know from an earlier inspection that the bees have 'modified' the bee gym by removing some of the 'scraper tapes'. I don't know whether this is because they have over used it or whether they decided they were foreign bodies and decided to remove them!
Philip Argyle

Stuart, just to let you know that I installed a BeeGym in one of my hives a week ago and put a Vaseline smeared floor tray in as well. Yesterday I counted 25 dead varroa mites on the tray.  It’s a strong colony on 14 x 12 brood frames (6 with brood) and 4 supers already full.
I had put the tray in for a week beforehand without the bee gym and only counted 2 mites after a week (but I forgot to put the Vaseline on it so it’s not a direct comparison because I suppose the fallen mites could have climbed back). Nonetheless an impressive change.
Matthew Last (May2014)

Stuart, just to let you know that my bees are incredibly healthy now that I have installed Bee Gyms in all 3 hives. I have them on the floors but am now considering putting them in ekes on the brood box.
I don’t measure mite drop but no longer see any deformed wings in either colony.
Matthew Last (May 2015)

Hi Stuart, I have to say that the device does appear to work - thank you.
I normally have a low varroa presence, and since I inserted the Bee Gym into my three hives at the beginning of April I have noted a very low / zero count of mites on my varroa boards.
I should add that two weeks ago I also applied Thymovar to see if this would affect the mite drop, and again today when I inspected there was a zero mite drop.
Graham Pooley

Stuart,
Many thanks for your email.  I look forward to receiving the Bee Gyms.  You may recall I purchased four Bee Gyms a few weeks ago, which I immediately put into four hives.  I have been impressed with the varroa drop in those four colonies in comparison to the varroa drop in the hive I have been using as a control.
I am therefore planning to put Bee Gyms into all of my hives.  And I am very much hoping that they will prove to be a viable non-chemical form of varroa control.
Good luck with your further research.
Kind regards,
Debs Steele

How does it work?

The Bee Gym is a framework housing four different shaped devices, which bees can use to scrape off or injure Varroa mites or other parasites.

1 The Flipper is a protruding, shaped plastic blade.

2 The spikes stick up from the side-bars of the gym.

3 The Limbo string is a fine thread stretched over a gap that the bees crawl through. It scrapes off mites from the bees’ backs.

4 The Parallel Strings are two fine threads, the upper and lower strings that the bee holds on to, and rubs against to dislodge or injure mites.

The Bee Gym is placed in the top of a brood box. The bees frequently pass over the Bee Gym and use the shaped components to help dislodge Varroa mites.

Does the Bee Gym fit into all types of beehive?

The Bee Gym is designed to work with any beehive. A space can be created above the brood frames using a shallow ‘eke’ (spacer). An alternative is to place the Bee Gym frame onto a framed Queen excluder. The gap needs to be around 16mm to give enough room for the bees to use the Bee Gym.

When is the best time to start using a Bee Gym?

Trials suggest that the Bee Gym is more effective if it goes in when the mite population is less numerous. This could be when introducing a bought-in nucleus colony or in spring when the population of mites is usually lower.

How easy is it to install?

The Bee Gym is easy to install, as it can be placed on top of the brood frames whenever the beekeeper is doing an inspection or checking the condition of the bees. The supers are lifted away, an ‘eke’ is added and the Bee Gym is then put in place. We recommend a single Bee Gym for a nucleus hive and two Bee Gyms for a 10 or 11 frame brood box.

The sidebars of the Bee Gym stand 9mm above the brood frames and the bees need another 7mm to move around on the Gym, so the gap required is 16mm.

What makes the Bee Gym different from other treatments?

The Bee Gym works with the bees all year round because it stays in the hive. It even seems to be busy during the winter when the bees cluster directly over and around the Bee Gym. It requires minimal intervention from the beekeeper and poses no risk to the bees.

Chemical treatments require the attention of a beekeeper and can only be used for a limited period. Some chemicals cannot be used when a honey crop is in the hive. Most of the chemical treatments for Varroa have detrimental effects on bees.

How long will a Bee Gym last?

A Bee Gym requires minimal maintenance aside from a periodic clean-up, and is designed to last for several years. As with any foreign object placed into a beehive, the bees will try to destroy it and eject it from the hive, so there will be some wear and tear.

Does the Bee Gym fit into current Varroa control?